November 9 was the birthday of Mikhail Nekhemevich Tal. Magical, unearthly, amazing. His family name, which means “dew” in Hebrew in many ways reveals the essence of the fresh, fragile, and short-lived genius from Riga. He was like a dewy bead – appearing out of nowhere in that symbolic 1956, Tal became a whiff of fresh air in his first USSR Championship.

Four years of incredible success followed. He played different chess seemingly flouting all the existing rules. A very young Misha, with an incredible energy and almost mystical appearance, soared to the very top. He was cocky, devilishly dodgy, and divinely beautiful while battling with the best players of the older generation, and even Botvinnik himself had to lay down his arms. Tal became the world champion. He was admired by the audience and the gentle sex – open, wanton, very young, “du soleil plein la tête”.

But then began a long black streak. Misha – as he was called until the last years of his life, despite any age gap – had serious health problems. This affected his preparation for the rematch against Botvinnik, and Tal was crushed by his 50-year-old namesake. Nevertheless, Tal cheerfully remarked that he was now the youngest ex-world-champion ever.

Oh, his amazing sense of humor. No world champion delivered so many memorable phrases, remarks, comments, and puns as Tal did, and that sums up Tal for me. His cheery disposition must have helped him survive his numerous health problems. He could have just sunk into a depression and never returned to the game. He cast his magic, played chess, and lived for it – tournaments, simuls, publications, endless blitz games. How about working on his chess or attending some training camps? Nope – at some point, Misha’s long-term mentor and coach Alexander Koblenz just stopped trying to change anything.

But there was no room left for daily routine and domestic life. Tal was absolutely indifferent to these matters and simply sidelined them. Organizational and monetary issues only distracted him. The young Tal could walk around in two different shoes for several days, be regularly late for flights; later in his life Misha could forget about a prize of many thousands or just lose a large sum of money. As for all these Soviet realities – they just hindered him. Just like that pawn from a dialogue with Botvinnik during one of the Olympiads: “Misha, why did you give up a pawn? – It disturbed me.” Tal was in no way anti-Soviet, he did not even notice the system’s shortcomings – all he needed was not to be distracted from his calling.

But he was distracted a lot and first of all by his numerous diseases. In 1962, he took part in the Candidates Tournament, hoping to qualify for the championship match again. Dream on! Having spent three-quarters of the tournament on pills, Tal ended up in a hospital. A sick kidney – that’s where young Misha’s troubles began, and thirty years later there would not be a single normally functioning organ in his body. Always with a cigarette – he chain-smoked two packs a day, not a stranger to alcohol, and absolutely disinclined to practice any sport, he burned himself out, but it is simply impossible to imagine him otherwise.

Back in the 1960s his young body recovered, and in 1964 the magician from Riga was back on track – he tied for first in the Interzonal (scoring +11 without a single loss), then consecutively beat Portis and Larsen only to lose in the final Candidates match to Spassky, formally becoming the third-ranked player on the planet. The Olympiad in Havana (1966) nearly ended tragically for Tal. A bottle hit his head in a bar – either thrown by mistake or out of jealousy – and sent Tal back to a hospital cot. As Petrosian ironically put it “only Tal with his cast-iron health could come round so quickly” – in a few days Tal was back steamrolling his opponents.

Here I would like to elaborate a little bit. Tal was incredibly good against players, albeit strong, but inferior to him. Using psychology brilliantly he would get his opponents to question themselves, fall into time trouble, and make mistakes. However, facing players of his own caliber – world champions, as well as good counterpunchers like Korchnoi, Polugayevsky, Stein – he had a hard time. His creativity lifted him high but harsh reality often brought him back, a few pawns, and sometimes pieces down. When Tal was in normal physical condition, such a style worked even against the best of the best – healthy Tal, healthy spirit, healthy game – but when he wasn’t optimal, it ended not with a bang but with a whimper.

During the late sixties, his health failed him more and more often. Major newspapers even prepared obituaries, although Misha was only about thirty. In 1968, he crashed out of the next cycle world championship cycle, losing the match to Kortchnoi. A prolonged crisis ensued: Tal did not make it to the Olympic team, and in Lugano (1968)he was replaced just a day before the departure as if being ostentatiously discarded. The authorities preferred older Smyslov, who did not have a good ground to be a part of the team but was on good terms with Soviet officials. By the way, it also makes Tal very special. Botvinnik, Petrosyan, Smyslov, Karpov – all of them, although to a different extent, were authorities’ darlings. Tal was not. Neither was Spassky. But Spassky was a rebel and did not want to keep his mouth shut. As for Tal, he was alien to all these considerations.

The late sixties and early seventies was not a joyous time for Tal. He tried to change his game style, knowing that his signature squares f5 and d5 were now securely covered, but these attempts did not yield results. He wasn’t even allowed to play in the USSR Championship in 1970, which was held in his native Riga.

He managed a short upswing in 1972-1973, but had had a health crisis again and flopped in the most important tournament of the year, the Interzonal in Leningrad (1973). Although he won the USSR Championship (1974) together with young Alexander Belyavsky, it seemed that his best days were behind him. Tal was nearing forty, failing to qualify for the Candidates time and time again, his arms sported track marks all over – “Misha is it true that you are a morphinist?” “No, I am chigorinist!” Well, he was not a chigorinist those days. How many of Tal’s games played at that time can you recall? Luckily for him, the duel between Karpov and Korchnoi came to the forefront and Tal was called up to help the Soviet champion in the battle against the renegade.

It should be noted here that for Mikhail Nekhemevich this ideological undercurrent was non-existent. He did not play these games. But he played chess, and it was the only important thing. So, I have a theory that only in that period – during preparation for the match and in the course of it – Tal worked hard on chess for the first time in his life. Not blitz games all day long, not “what a delicious pawn, I would grab it”, not “if Misha has an open line, there will be checkmate” – but serious, diligent work with one of the finest chess players in history, the full antithesis of Tal himself, young Anatoly Karpov. After that, Tal caught his second wind. His once famous energy took on a new shape. He cranked out a series of amazing results, winning everything from the end of 1978 to the end of 1979: the USSR Championship (1978), a super tournament in Montreal (1979) (together with Karpov), the Interzonal in Riga (1979)… He felt the benefits of working with Karpov until the end of his career. He became more composed, more practical, more solid. 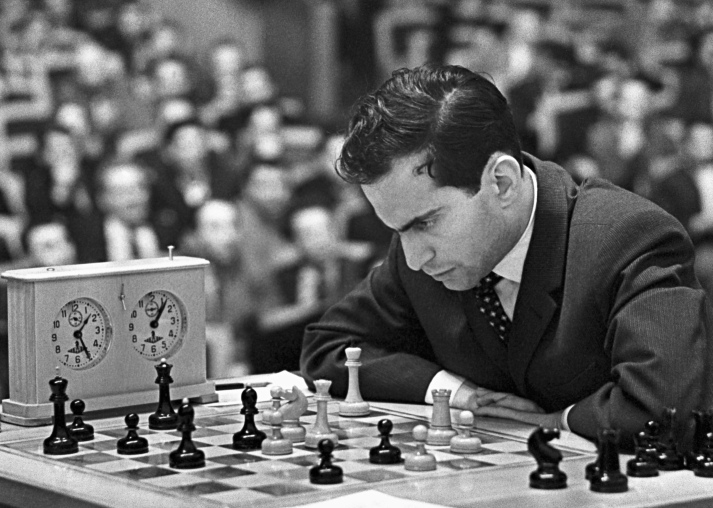 Alas, it was not enough in the Candidates match of 1980 against Lev Polugaevsky. It wasn’t enough because of a conscious but reckless decision. Mikhail Nekhemevich erroneously reasoned that he would be able to compete with Lev Abramovich, the world’s best debut analyst on his territory. Of course, Tal got prepared – and one of the brightest analysts of that time Alvis Vitolins was helping him – but it all ended predictably. Polugaevsky confidently won, and Tal, who by that time had gained an incredible rating of 2705 (third after Fisher and Karpov), begun a slow decline. Bit there still was 12 more years of life in him and great performances ahead.

There would be an incredible victory in the first World Blitz Championship (1988), there would be many interesting games, a remarkable success in the Interzonal in Tasco (1985), and a good result in the Candidates. It was a new Tal: one-third of his games would end in a draw just after one hour of play; he would learn how to play different chess and significantly improved his record against Korchnoi. But he was dying in front of us – it’s was painful to look at the very sick fifty-year-old Tal – but he still maintained the highest level. At the same time, he shared his love for chess in countless articles, performances, training sessions with children… Tal did not become angry and irascible because of his illnesses – he was always Misha, a genius who has constantly changed but still stayed true to himself.