Riga Grand Swiss: Round One Report 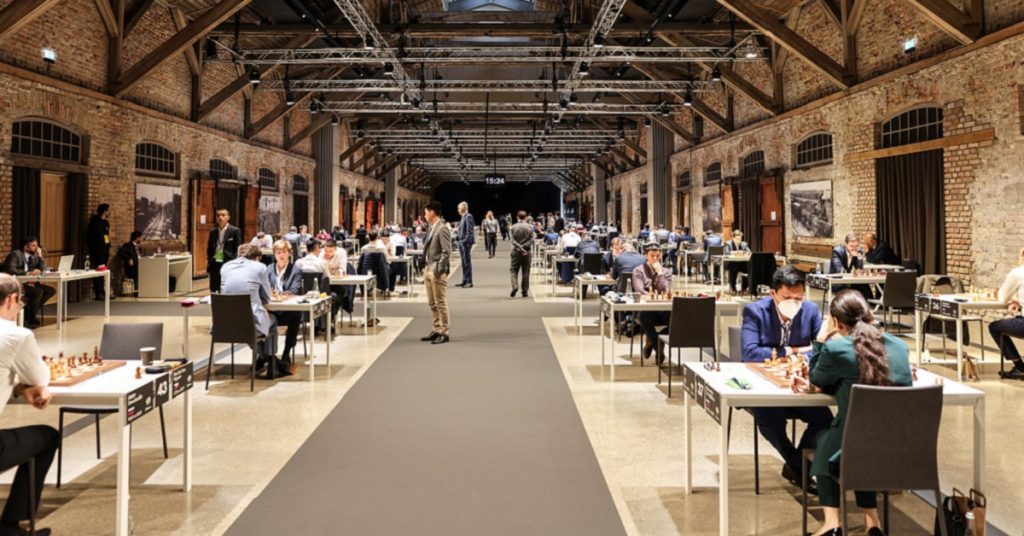 The first day of what is set to be one of the strongest swiss tournaments ever held saw very tough games in the open section, with the majority of the encounters resulting in draws. The inaugural Women’s Grand Swiss delivered significantly more decisive outcomes

At about half-past one local time in Riga, most of the players taking part in the 2021 FIDE Chess.com Grand Swiss and Women’s Grand Swiss gathered at the Hansas Perons playing hall, eager for the round to begin. By two, the participants were at their designated tables, face to face with their opponents in the first round of what is promising to be one of the strongest Swiss tournaments ever held in the history of chess.

The opening of the round was preceded by a minute of silence to honour the deceased Latvian chess coach and former director of the Riga Chess School Aivars Stašāns (1954 – 2021), who passed away on Tuesday evening.

After a detailed address by the acting arbiter Ana Srebrnic, asking the players to carefully read and strictly follow the Health Protocol and the dress code, the clocks were allowed to start.

The first move on the top board in the open event was made by FIDE President Arkady Dvorkovich in the game Caruana vs Chigaev. 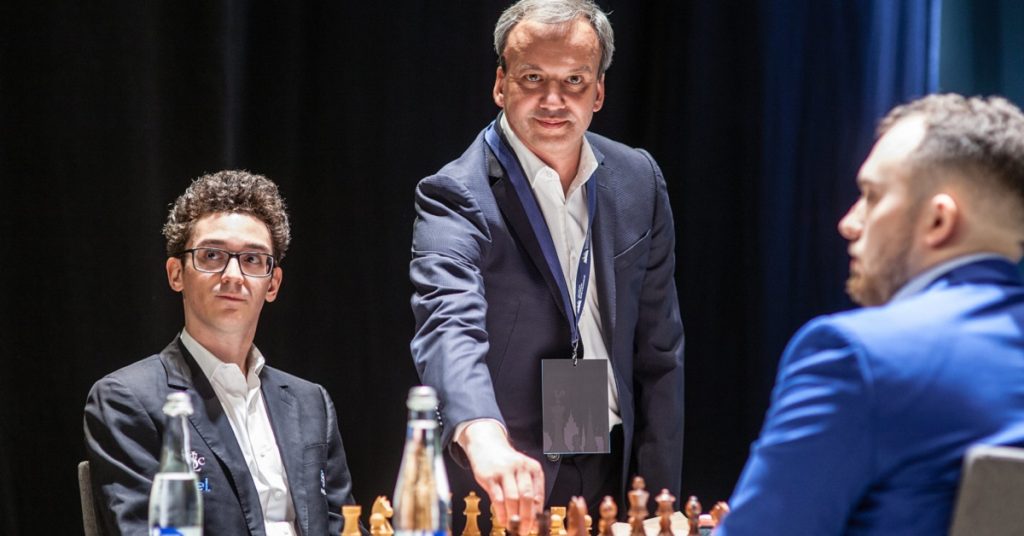 The Open tournament
The first day did not bring many surprises, with most of the games on the top boards in the
Open event ending in a draw. Out of the top ten players in that section, only three won their games: world number two and former contender for the title of World Champion Fabiano Caruana, the promising naturalised Frenchmen Alireza Firouzja and the rising Russian star Kirill Alekseenko.

World number two, Fabiano Caruana played the Sicilian Keres Attack, gradually building up the pressure on his opponent before making a thematic knight sacrifice on d5.  Maksim
Chigaev maintained balance for a while but slipped with 27…Rg6? and had to resign seven moves down the road.

Firouzja’s charge to victory over Nijat Abasov went via the Steinitz attack in the Petroff, which led to a sharp position with opposite-side castling. After energetic 17.g4! Nijat snatched a poisoned pawn, which was a poor choice – Alireza’s pieces jumped into action and quickly got to Black’s king.

Kirill Alekseenko, who was the wild-card at the previous Candidates Tournament in Yekaterinburg, scored a convincing victory over his Ukrainian namesake, Kirill Shevchenko, setting the base for a promising start in the event.

The only woman who decided to participate in the open event – Aleksandra Goryachkina – drew her game against the Peruvian chess prodigy, Jorge Cori. Goryachkina has already qualified for the Candidates as the runner-up of the World Championship match in 2020, so she has decided to take part in the Open event and see how high she can reach.

Playing until the late hours of the evening, the former contender for the title of World Champion, Boris Gelfand, lost as White against Dmitrij Kollars of Germany.

After the first round of the Grand Swiss, out of 103 players in the Open section, only 20 have started with a victory.

The first round of the inaugural Women’s Grand Swiss saw many more decisive outcomes than the open section.

Former Women’s World Champion and top-seeded player in the Women’s Grand Swiss, Mariya Muzychuk, drew her game Aleksandra Maltsevskaya of Russia on board one. Not even the support of her sister Anna, who is a commentator with the Chess.com broadcast team of the event, could help her claim victory against an over hundred-points lower-rated opponent.

Second-ranked Nana Dzagnidze of Georgia staged an unpleasant start for Olga Girya, defeating her in the Catalan. In a queen vs queen endgame, Dzagnidze’s conversion was not optimal, but eventually, she secured a free-running pawn on c-file, which gradually made its way forward, followed by her king pushed ahead by the desperate checks from Girya.

In Round 1, 18 of 50 players in the Women’s event have started the tournament with a victory.

Round Two starts at 2 PM on the 28th of October.

The pairings for the second round for the Open event can be found here: https://chess-results.com/tnr587230.aspx?lan=1&art=2&rd=2&flag=30