Round Three Report: The only player with a maximum score: Alireza Firouzja 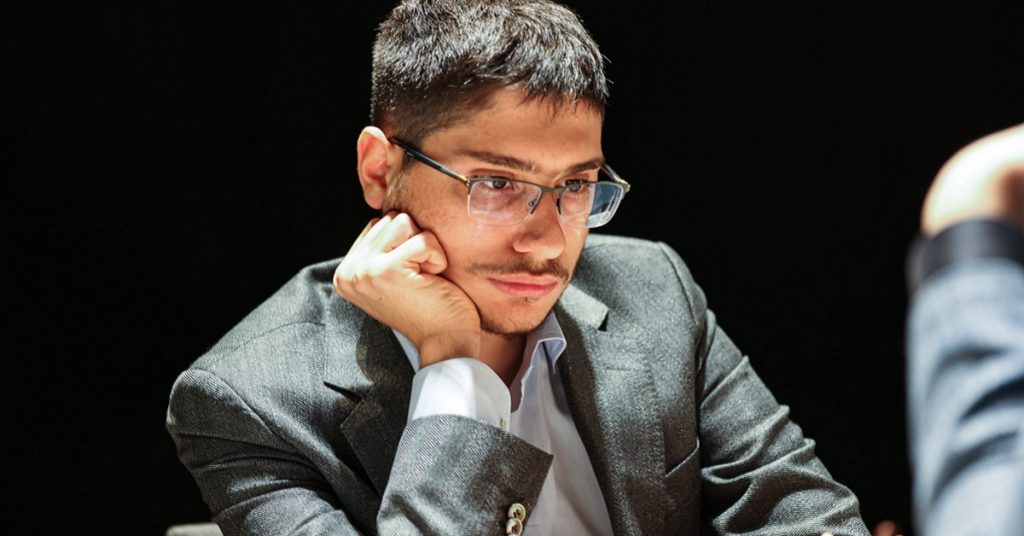 After three rounds of games in Riga, out of 157 participants, naturalised Frenchman Alireza Firouzja became the only player –in the entire Grand Swiss – to have won all three games

The third round of the Grand Swiss was opened by FIDE Managing Director Dana Reizniece-Ozola, by making the first move on board one of the Women’s tournament. This is the first time that the Grand Swiss is featuring a women’s section. “FIDE is strongly committed to improving women’s chess and having the women’s tournament was very important. Also, Latvia – my home country – is a place where approximately half of the managerial positions are held by women, without any quotas but naturally, so, this seems to be the natural place to launch a bigger fight for women in chess”, says Dana Reizniece-Ozola.

After three rounds of games, the Iranian-born rising chess star Alireza Firouzja has managed to distinguish himself as the sole leader in the Open section of the Grand Swiss.

Playing on the first board, Firouzja was up against Alexandr Predke who had a spectacular win in the second round against Nodirbek Yakubboev. In the Ruy Lopez, Firouzja gradually positioned his pieces slowly numbing Black’s resistance. With a strong bishop on b2, he constantly made threats to the Black’s castled king. After the exchanges in the centre, the game transpired into an even position, despite Black being a pawn down. Firouzja pressed on and, after a trade of the rooks in the 42nd move, white regain the advantage. Predke continued to resist, but Firouzja managed to find the better moves and he ultimately forced his opponent to resign, having played for nearly six hours.

On Board two, Fabiano Caruana was leading white pieces against Ivan Saric of Croatia. Saric had an excellent start with two out of two. Before this game, the two met five times with Caruana leading two to one, with two draws. After dropping half a point in round two to Nihal Sarin, the world number two Caruana – who was white – was looking for a win against Saric.

The Four Knights Sicilian was played, and Caruana managed to create a somewhat more comfortable position but at the cost of being low on time. After Black castled on the queenside, Caruana launched a pawn and rook attack on the left flank. White captured a pawn in the middlegame, and eventually, there was an endgame with each player having a bishop and a rook. Caruana activated his king to keep up the pressure. The Croatian defended himself well and after nearly five hours, the two agreed to a draw.

There was almost a big upset on board three in the game between Levon Aronian and Anton Demchenko. In the Four Knights opening, the game progressed normally but after an imprecision in the middlegame by Aronian – who is the fifth strongest player in the world – White’s queen penetrated the queenside, leading to the loss of a pawn. With a free runner on the a-file, White gradually progressed. After the exchange of the queens, the game entered a rook endgame with a clear passed a-pawn for White. After a heroic effort, and having shown patience and defiance, Aronian managed to capture the a-runner. Although Aronian was a pawn down, the position was equal and the game ended in a draw.

One of the top seeds, Maxime Vachier-Lagrave, drew as black with Alexandr Donchenko. With two out of three, the Frenchman still has strong chances to fight for the top.

The first game with a decisive outcome in the Open section was that between Vasif Durarbayli and Daniil Dubov. After a mistake in the opening, white couldn’t find a way back in and Dubov won. Among the top boards, Yu Yangyi was victorious against Matthias Bluebaum.

There are now as many as six players trailing Alireza Firouzja by half a point: Yu Yangyi, Pavel Ponkratov, Robert Hovhannisyan, Nihal Sarin, Ivan Saric, and Evgeniy Najer.

After just three rounds, there are no more players with a maximum score in the Women’s section. The top rank is made up of seven players with 2.5 points, led by Nana Dzagnidze of Georgia.

Nana Dzagnidze, who had a perfect start with two out of two found herself in trouble as white against Natalia Pogonina. The Reti opening was played, where white plays slowly, trying to gradually outmanoeuvre the opponent. After 11.g4 the position became sharp but soon after Pogonina managed to put Dzagnidze’s attempts to a halt and sort all of her pieces into attacking position. Caught on the backfoot, Dzagnidze had to give up her queen and the position transpired into a rook and two bishops vs a queen and knight endgame. But the Georgian fought back, holding her line and the game was eventually drawn.

On board two Harika Dronavalli defeated the former world champion Antoaneta Stefanova. In the Yurtaev variation of the Ruy Lopez, Stefanova managed to come up with a free-runner on the a-file by move 25. However, she didn’t play precisely, and after the game transpired into a rook vs rook endgame, she dropped her extra pawn. The position was equal but it was Dronavalli who now had the psychological advantage. Stefanova miscalculated and after an exchange of rooks, the position transpired into a pawn endgame where she was lost.

Round Three saw the – so far – shortest game of the tournament. On board four, after some 40 minutes of play, Elisabeth Paetz drew as white against Leti Tingjie. The Ruy Lopez was played and after a big exchange in the centre, the two ended with rooks and an opposite-colour bishops endgame which looked like a draw. After 30 moves, they decided to split a point.

Shortly after this, another quick draw occurred – between Salome Melia and Olga Girya. As was noted by Anna Myzichuk, there are clear lines that lead to a draw and it’s usually White’s choice if they want to go for that line or not.

Nino Batsiashvili drew her game with Zhu Jiner, and both are now on 2.5 points.

On board eight, one of the youngest rising stars in women’s chess Zhansaya Abdumalik got into a sharp position as white against Ukrainian IM Nataliya Buksa. Abdumalik sacrificed a bishop for an initiative in the centre, preventing Black’s king from castling. Eventually, Abdumalik managed to create a strong initiative and with a tactical attack effectively won the game.

Round Four starts at 3 PM on the 30th of October.