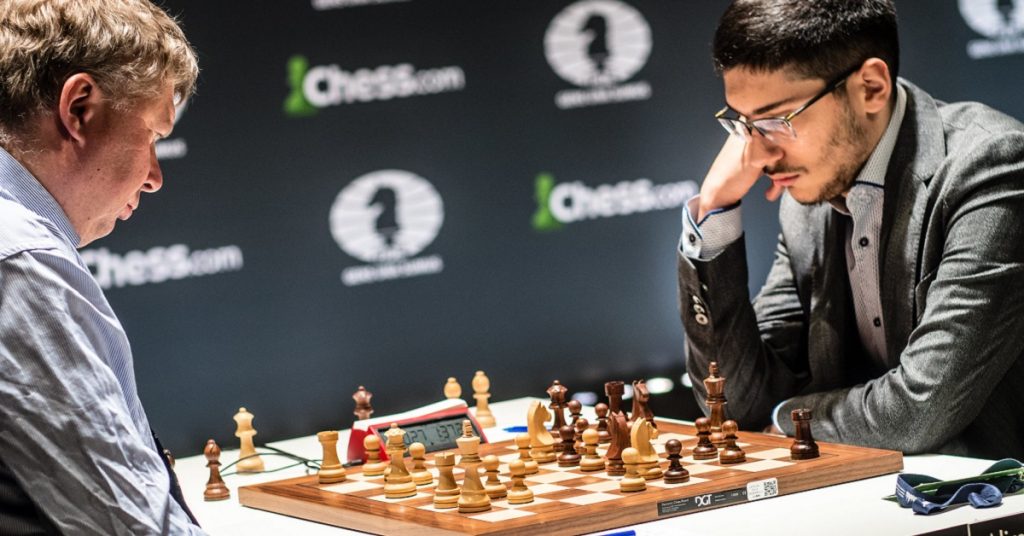 Halfway through the 2021 Grand Swiss, five players are tied for first place in the Open event, while Lei Tingjie is the sole leader in the women’s section

Round Six was the final round before a one-day break at the Grand Swiss, with many players welcoming the pause in the games to regroup their thoughts and plan their approach for the second, most important part of the tournament.

The top game of the day was on board one where a clash of generations took place. Alexei Shirov (who became GM in 1990) was White against Alireza Firouzja (born in 2003). Shirov opened with his usual 1.e4 and – what else to play in Riga? – soon the Tal variation of Caro-Kann Defense was on the board. Alexei Shirov, in his element, was developing an initiative with White, but Firouzja did not agree to be haunted by ghosts, took a hanging pawn on h4 and proved that his own attacking ideas are stronger. White found himself in a very unpleasant situation, but Black’s mistake on the 36th move let Shirov get away with it. ”The naturalised Frenchman stormed out of the playing hall, while Alexei Shirov confessed that he was happy with the outcome as he was “clearly worse, maybe lost”.

2015 European Champion Evgeniy Najer is having a great tournament, but it seems that luck isn’t with him. He was White against Fabiano Caruana on board two, which was the last game on the top boards to finish, lasting around six hours. The Taimanov variation of the Sicilian quickly transposed to a very sharp and double-edged position with both kings in the center.  Taimanov variation of the Sicilian. A very sharp position transpired quickly, with both kings in the centre. Russian Grandmaster Najer managed to realign his pieces better and push through the centre, putting the world’s second strongest player on the backfoot. As it often happens, the sharp fight ended in a calm bishop vs knight endgame with a pawn up for White. Caruana showed precision and stubbornness in defense not giving his opponent an immediate break-through. After 59 moves he claimed threefold repetition. Najer was confused but the arbiters confirmed and he had no option but to accept a draw. Had he defeated Caruana, Najer would have been to sole leader of the tournament. Caruana is now on 4/6, trailing the top five by half a point.

Maxime Vachier-Lagrave started aggressively in his game against Pavel Ponkratov. The Russian played the French defence, to which the Frenchman responded by making moves quickly, clearly coming confident in his preparation. and sacrificing a pawn early in the opening. Following 15…h5, Vachier-Lagrave increased pressure on the kingside creating a strong advantage which ended in a win on move 26. MVL finished the first half of the tournament with 4.5/6 putting him in a comfortable position to attack the top two spots which lead to the Candidates.

The Frenchman is clearly satisfied with his own performance in the first half of the event: “So far my play is convincing. I did not have any long games, so it’s all good. But now the decisive games are happening and I will need more wins. It’s a quest, it’s not over.”

The game between Samuel Sevian and Yu Yangyi on board five was off to a very slow start. Some three-quarters of an hour into the round, the players made just six moves in the London system of the Queen’s Pawn Opening. Throughout the 30 moves played in the game, the position was equal without much excitement and the players called it a draw.

On board five, 17-year-old Nihal Sarin was up against David Navara who after a slow start in the tournament with two draws, sprung to the top boards with 2.5 points in the last three rounds. The Czech opted for the Gruenfeld defence. A sharp position developed on the board and on move 16 Navara, in his trademark creative style, decided to give up his queen for two rooks. However, the material imbalance seemed to favor White. Sarin managed to create passers on files a and c, but Navara’s play was more precise. The position eventually transpired into a rook vs queen endgame where the Czech created a fortress and drew the game.

Indian GM Krishnan Sasikiran, four-time national champion, also joined the top leaders of the tournament with 4.5/6 having won as Black in the Nimzo-Indian against the promising Russian player Alexandr Predke.

Levon Aronian, who was on 3/5 before this round, was white against Alexander Donchenko. The English Opening was played. Aronian played fast and managed to develop nicely on both flanks, eventually achieving space advantage and creating weaknesses for his opponent, but Donchenko held his own. In the opposite bishop’s endgame a draw was agreed upon repetition. With 4/5 both Aronian and Donchenko have joined Caruana and a score of other players trailing the leaders by half a point.

The shortest game in the tournament – lasting just 14 moves – was played between Georgian Baadur Jobava and Jules Moussard of France. Speaking after the game, Jobava said his first reaction was to feel sympathy for his opponent as he himself has been in similar positions. “But this is a sport. Someone has to win and these things happen”.

Another quick game with a decisive outcome was played between Sergei Movsesian and Lucas Van Foreest where Black was beautifully mated on move 29.

Lei Tingjie became to sole leader of the women’s event after winning with white pieces against Jolanta Zawadzka on the top board. The Ragozin was played and Black managed to align her pieces better, however, after 27…c5 the initiative was handed over to White. Tingjie played dominantly, forcing her opponent to give way, ultimately creating a winning position.

On board two Zhu Jiner was white against Elisabeth Paehtz. In the Kalashnikov Sicilian Paehtz got into serious time trouble but managed to keep on fighting. Despite having a weaker position, Paehtz managed to hold her opponent to a draw.

Harika Dronavalli of India was white on the third board, playing Georgian Nino Batsiashvili. In the Ruy Lopez, White had managed to gain better control of the centre and get some initiative which resulted in winning a pawn. However, after further exchanges, the game moved to a rook endgame where, despite being a pawn down, Black could easily hold a draw. The two decided to split a point on move 79.

The Russian duel on board four between Natalija Pogonina and Olga Badelka ended in a win for white after Black made a blunder in the middlegame, completely destroying her position. With 4.5/6 Pogonina has joined the top-tier of players sharing second place.

On board five, Nana Dzagnidze was white against top seed Mariya Muzychuk who had a slow start to the event with four draws. This was a very important game for both of the players as neither of them has qualified for the Candidates and both have a chance to qualify based on their ratings, so the outcome of this duel was strongly influencing both issues.

The Alapin variation of the Sicilian Defence was played. The choice of opening clearly surprised Dzagnidze as she spent a lot of time choosing her reply to 2.c3.The opening preparation played perfectly for White, as she quickly developed a crushing initiative in the center, forcing Black to give up material and the rest was the matter of technicality. On move 49 Black resigned. Muzychuk finished the first half of the tournament on plus two and is among the top leaders of the women’s event.

Alexandra Kosteniuk, who had a misfortune loss in Round Five, managed to spring back to the top with a victory against Agrawal Vantika. In the Canal attack of the Sicilian Defence, the Russian managed to create more initiative, resulting in a win.

Tuesday, 2nd November is the rest day at the Grand Swiss.

Round Seven starts at 2 PM on the 3rd November.