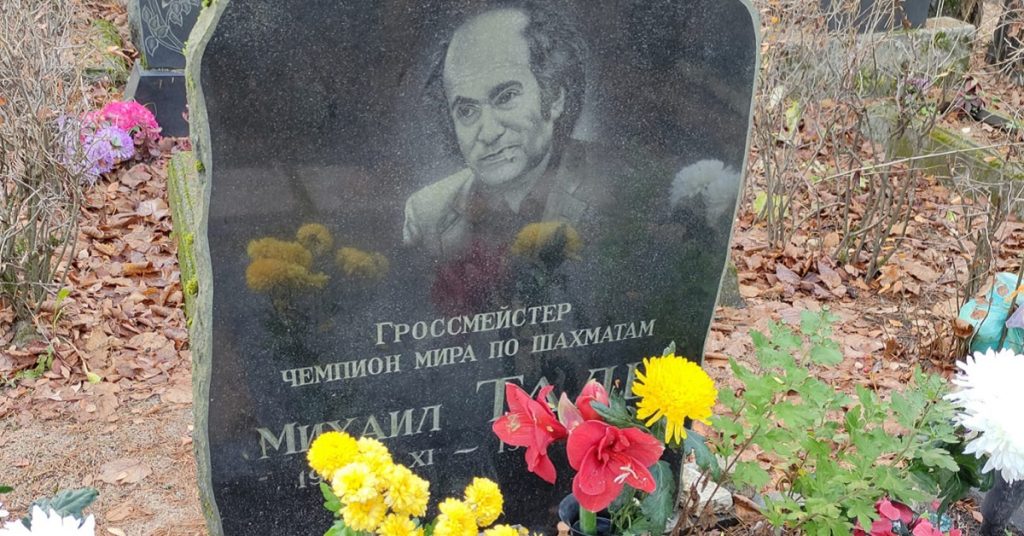 In Vidzemes, on the eastern outskirts of Riga, a 15-minutes-drive from the city centre is the New Jewish Cemetery – the final resting place of the eighth World Champion Mikhail Tal (Mihails Tāls).

Tal’s grave is located close to the main entrance to the cemetery, on the right-hand side of the central pathway. He is buried among the closest members of his family.

A black marble headstone has the image of the great master, showing him – as usual during his life – smoking a cigarette. Shortly after the headstone was erected, many pointed out that it was extremely unworthy to portray the great chess genius in such a fashion. Others, however, agree with the idea to show Tal in his most recognizable form, with a cigarette on the one end of his lips, with a raised look, exploring the world around him.

One of the more interesting facts about Tal’s grave is connected to the date of his death. Simply put – it is not correct. The headstone states 27th June 1992 as the date of his death when, in fact, he died a day later. The error occurred because Tal died in Moscow late in the evening, so there was confusion as to the exact timing and date of his death. However, it could be argued that this is also a sign of some strange poetic justice: Tal, who was suffering from ill-health since he was born, managed not just to live longer than anyone with his problems could expect but, also, to outlive death for one day! (On the headstone, at least).

It is a Jewish tradition to leave a stone on top of the grave of a loved one. There is a similar tradition on Tal’s grave, but instead of stones visitors leave – chess pieces! The majority of the chess pieces on Tal’s grave are queens, because – both on and off the board, he had many queens and loved them all. (Or, as the great master put it in one interview: “In youth I liked to sacrifice my queens, now I’m married and I keep my queen”.)

Some people who attended the funeral in 1992 have also suggested that chess pieces were thrown into his grave, but others who were there say this wasn’t the case. As I am writing a book about Tal, I managed to trace down the gravedigger who was there at the burial. While he couldn’t recall much, he does remember being paid very handsomely for his services! In a way, this also echoes the generosity that was always present around Mikhail Tal, both in life and – it seems – in death as well.

My most recent visit to the Tal’s resting place was with Milan Dinic, the Press Officer at the Grand Swiss. Milan and I spent quite some time there, discussing Tal, his life, family and the eerie subject of death. As we looked around, Milan noticed one thing which nobody has pointed out until now, at least to my knowledge: just next to Tal is a family grave bearing the last name – Nepomniachtchi! While we don’t know if there is any connection to the family of Ian Nepomniachtchi, it is nevertheless a strange coincidence to have two great chess names next to each other, tied for eternity. 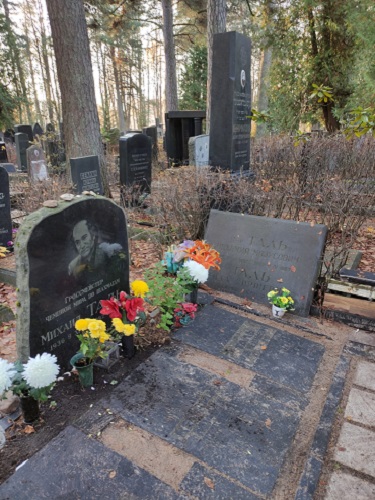